The Nelson Kite Club was formed in June 1998 after many local fliers saw a need for organising themselves as a social and lobby group to further kiteflying in our region. In August 2001, the Nelson Kite Club became an Incorporated Society. This gives more credibility for applying for funding and more clarity and protection for members.

In October/November 1998 The Nelson Kite Club lobbied the Nelson City Council to remove or shift the golfers on Neale Park in Nelson. They failed to stop golf practice on the park, but got the practice area moved. Golfers on the park are still a nuisance today, with many flouting the rules on an ongoing basis. Fliers are advised to ignore these idiots and if they do get hurt by a wayward golf ball, to get the Police immediately, file assault charges and lodge a formal complaint with the Nelson City Council.

Since then, Rainbow Flight has passed over co-ordinating the Nelson Summer Kite Festival to this great bunch of folks to run, manage and enjoy the fruits of a successful event. Despite challenges with finding funding, the Nelson Kite Festival still survives as the longest running annual kite festival in New Zealand!

With a $5 individual and $10 family membership, The Nelson Kite Club puts out an ocassional “Kitelines” newsletter, encouraging ongoing involvement in a growing kiteflying scene here.

Either first or second Sunday of each month (whichever has the better afternoon low tide), we meet at Rabbit Island to fly, just for us! Come out and learn to fly kites, use a kite buggy, a kite landboard, a kiteboard, a KiteCat…. buggy race, altitude sprints, rokkaku fighting, sport kite flying, pair and team flying….whatever you want to do to improve your kite skills without the pressure of needing to cater to a public kite display!

If the wind is southerly through westerly we will go to the Wakapuaka Sandflats, north of Atawhai if dry, and if wet probably Neale Park. If in doubt check out local weather via NZ Met Service. 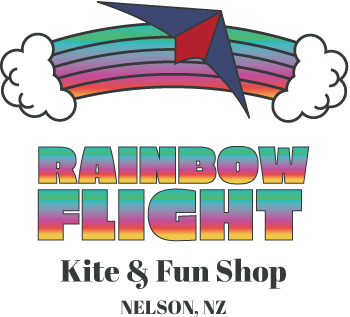 Simply email, fax or phone us with :-